Skip to Main Content
It looks like you're using Internet Explorer 11 or older. This website works best with modern browsers such as the latest versions of Chrome, Firefox, Safari, and Edge. If you continue with this browser, you may see unexpected results.

Books and websites on specific research topics for physical geography, as well as practice quizzes

This tutorial explains the relationship between the Earth and the Sun and how that causes the seasons, with questions embedded throughout to help you check your understanding. Answers to all the questions are on the next page.

To understand why we have seasons, we need to look at the relations between the Earth and the Sun.

Most of the planets in the solar system also orbit on or near the plane of the ecliptic. (You can see in the drawing below that the planets are more or less lined up, instead of circling the Sun at just any old angle. No, this is not drawn to scale.)

The Sun’s rays are pretty close to parallel to each other when they reach the Earth: 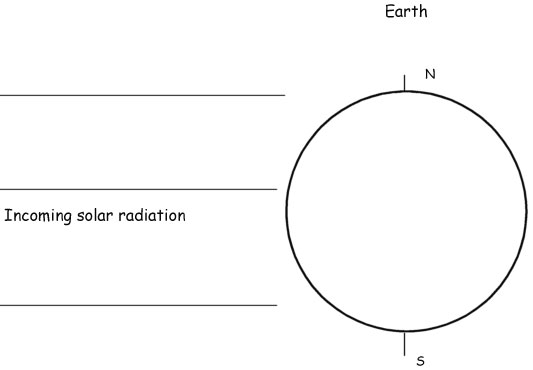 So, if the Earth’s axis of rotation were perpendicular to the plane of the ecliptic, 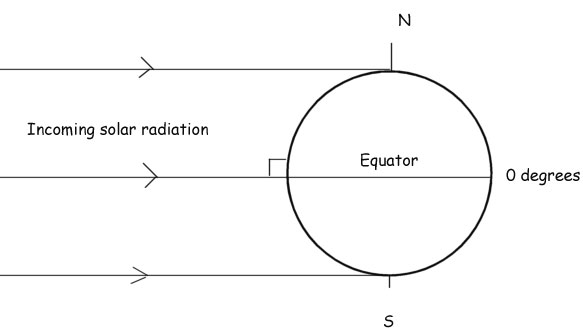 If that were the case, we would have no seasons. 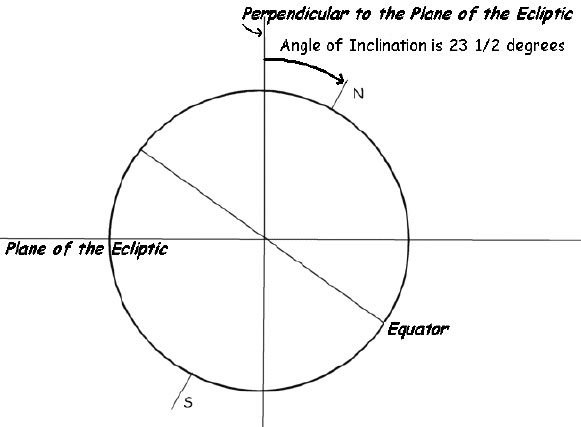 The Earth maintains the same angle of inclination throughout its orbit. Another way of saying this is that the Earth’s axis is parallel to itself at all points in its orbit.

1. To which star does the Earth’s axis point? That is, which star is almost directly overhead at the North Pole?

Let’s look at this more closely. At one point in its orbit, the northern part of the Earth has its maximum inclination toward the Sun. Since the Earth’s axis is tilted 23.5 degrees, then on this particular day, the Sun’s rays are striking the Earth directly at a latitude approximately 23.5 degrees north of the equator (that is, the Sun’s rays are coming in at an angle of 90 degrees here; this is the subsolar point). This occurs on June 21 or 22 each year, and the day is known as the summer solstice (summer for those who live in the Northern Hemisphere, that is; it might be safer and more generally applicable to call it the June solstice). 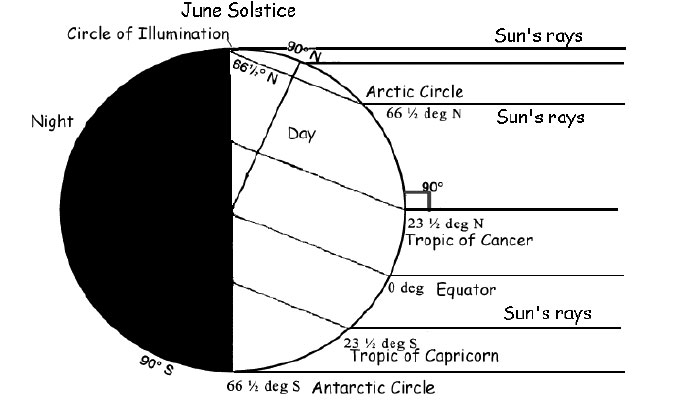 On the other end of the globe, the circle of illumination never reaches the South Pole, and in fact it doesn’t get to within 23.5 degrees of the South Pole. So every place more than 66.5 degrees south of the equator misses out on the Sun’s rays entirely that day; they get 24 hours of darkness (twilight, really, since the Sun is not that far below the horizon). The latitude 66.5 degrees south is known as the Antarctic Circle.

Let’s take a look at the opposite end of the year, six months later, on December 21 or 22. On this day, the Earth has gone halfway around its orbit, and is opposite the point where it was on the June solstice. The situation is exactly reversed. The Southern Hemisphere of the Earth is tilted toward the Sun, and the Sun’s rays are perpendicular to the Earth’s surface at 23.5 degrees south. This is the subsolar point: the Sun is directly overhead at noon at this latitude. The farthest south that the Sun’s rays shine directly is latitude 23.5 degrees south, the Tropic of Capricorn. This is the southern boundary of the tropics. On this day, the area north of the Arctic Circle gets no sunlight, and the area south of the Antarctic Circle gets 24 hours of light.

This is called the winter solstice (or December solstice). 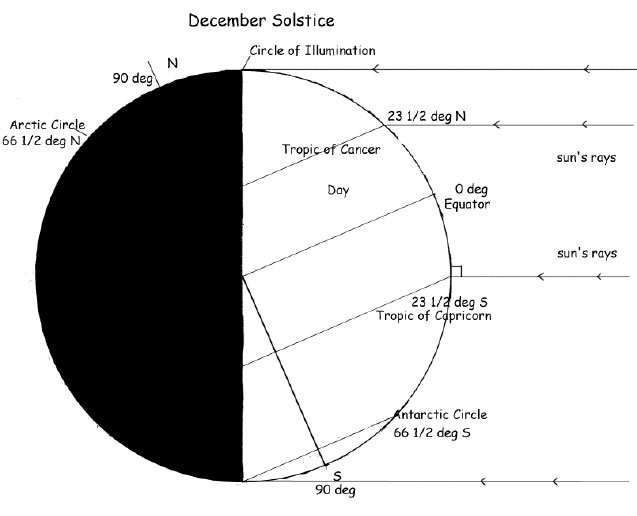 7. Six months after the December solstice (on, say, June 21), where will the subsolar point be?

8. Three months after the December solstice (on, say, March 20), where will the subsolar point be?

Now for the intermediate situation. The subsolar point is at the Tropic of Cancer in June, and at the Tropic of Capricorn in December. Midway between the solstices are two dates when the Sun shines directly on the equator, and we have a situation like our hypothetical one, where the Earth’s axis is perpendicular to the ecliptic. (The axis is still tilted, still pointing at the North Star, but it is tilted sideways with respect to the Sun, rather than toward or away from the Sun).The circle of illumination passes through the Poles, the Sun’s rays strike the equator at an angle of 90 degrees, and every part of the Earth has 12 hours of daylight and 12 hours of night. This happens twice in the year. These two days are called the equinoxes. (Equinox means “equal night”, since day and night are equal at 12 hours each.) 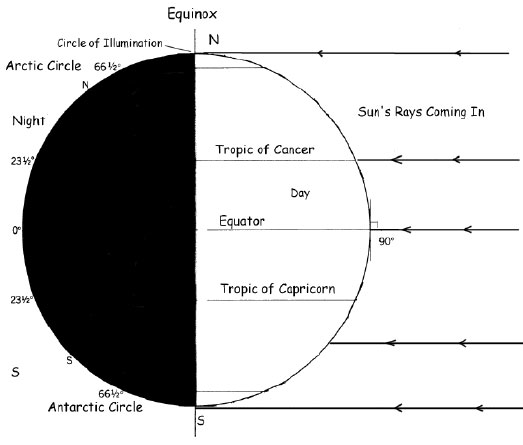 One more point about the Earth’s orbit: By now you know that the reason we have seasons is the tilt of the Earth’s axis. But sometimes people wonder if seasons have anything to do with the distance of the Earth from the Sun. We know that can’t be the case, because the seasons are opposite in the Northern and Southern Hemispheres. However, if we look at the Earth’s orbit closely, we find that it is not exactly circular. Rather, it is an ellipse, which is an oval shape, or a very slightly flattened circle. The Sun is at one focus of the ellipse. This means that the Earth’s distance from the Sun does vary. The point at which the Earth is closest to the Sun is called perihelion (from the Greek peri, close or near, and helios, meaning Sun). Perihelion takes place on January 3, which, of course, is during winter for the Northern Hemisphere and during summer for the Southern Hemisphere. The point at which the Earth is farthest away from the Sun is called aphelion (Greek ap, away from, and helios, Sun). 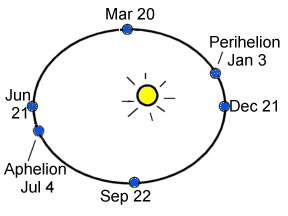 9. Aphelion takes place on July 4, which is summer for which hemisphere?

At the December Solstice - The date is December 21 or 22

At the September Equinox - The date is September 22 or 23